The crown jewel of the lake Erie islands

Put-in-Bay is the Midwest’s most popular summer vacation destination, off Lake Erie’s shores. Often referred to as the “Key West Of The North,” the island offers more fun-filled & action per square mile than anywhere else on the planet!

With an abundance of events, vibrant nightlife, pubs & restaurants, shopping, and Put-in-Bay Things To Do, there is plenty to do and learn about Put-in-Bay for the entire family!

The most popular Put-In-Bay Rentals And Hotels are located in the heart of the downtown area—just a short walk from the nightlife and dining. Golf Cart Rentals eliminate the need for a vehicle on the island and are a convenient way to explore the island.

Two ferry boat services connect the island with the mainland offering transportation to and from the island. Boats also operate between Kelleys Island, Middle Bass Island, Port Clinton, and Sandusky, Ohio, at Cedar Point.  It’s how to get to Put-in-Bay!

Over 800,000 tourists each year make their way to Put-in-Bay every year for an adventure-filled Ohio vacation getaway.

With so many Put-in-Bay attractions and other special events occurring every weekend, we’ve provided an event schedule about Put-in-Bay available here on our website.

Put-in-Bay played an important role in the War of 1812 between the US and England. The waters near Put-in-Bay were the site of United States Navy Commander Oilver Hazzard Perry and his warships.

He coasted from the port of Put-in-Bay with ten ships on September 10, 1813, to encounter a British naval squadron of six ships commanded by Captain Robert Heriot Barclay slightly north of South Bass Island in the famed “Battle of Lake Erie.”

Reading About Put-in-Bay in History books tells us that after conquering the British, Perry tore off the rear of an envelope and scribed. “Dear Gen’l: — We have met the enemy, and they are ours; two ships, two brigs, one schooner, and one sloop. Yours with great respect and esteem, O.H. Perry.”

Perry’s triumph in the War of 1812 in the “Battle of Lake Erie” helped to guarantee the Northwest Territory for the United States.

Perry was seen as a national hero of the American people, which led to his promotion to captain following his success.

Perry’s Victory and International Peace Memorial was constructed many years after the war to commemorate the enduring peace between the United States, Britain & Canada.

It was constructed between the years 1912 to 1915 “to instill the lessons of international harmony by arbitration and demilitarization.” Guests staying at the All Star Ohio House have a nice view of the monument from their private deck.

Getting here is half the fun!

Getting To Put-in-Bay On The Put-in-Bay Ferry Boats can be a fun and educational experience!

Put-in-Bay is served by two ferry boats, the Jet Express & Miller Ferry.  Both offer safe and reliable transportation to and from Put-in-Bay.

Year-Round. Passengers may walk onto any boat without reservations, both arriving and departing.

Many travelers find the Jet Express one of the most convenient ways to reach Put-in-Bay as it is the only ferry boat that offers downtown service eliminating the need to take a bus or taxi into the tourist area.

The Jet Express also offers late-night service extending your vacation time!  Reservations are not required; however, you may wish to book your ticket online to secure the departure time you prefer. Be sure to reserve your Put-in-Bay Golf Cart Rentals before you depart!

The Miller Ferry To Put-in-Bay

The Miller Ferry departs from Catawba Island and services Put-in-Bay and Middle Bass Island. It is the only ferry that can transport vehicles to the island.

Please keep in mind bringing a vehicle to the island is NOT recommended or necessary. Parking on the island is scarce, and the wait time to get a vehicle on or off the island can be several hours long.

Reservations are not needed for automobiles Departing to Put-in-Bay (South Bass Island) from Catawba Island.

Automobiles are taken on a first-come, first-served basis on the Miller Ferry Boats. Cars can make a round trip on the same day, Monday thru Friday. Because of high demand, they frequently cannot make a round trip vehicle passage within the same day on Saturday, Sunday, or Holiday Mondays such as Memorial Day or Labor Day weekends.

For Passengers Going to Put-in-Bay from Catawba Island, reservations are not needed. Passengers are taken on a first-come, first-served basis.

The procedure and process are the same for vehicles Departing Put-in-Bay to the Mainland.

During Spring & Fall Schedules. Vehicles must be in line before 4:00 pm Monday through Saturday and before 3:00 pm on Sundays and Mondays to be guaranteed passage off Put-in-Bay.

During Summer Schedules. Vehicles must be in line before 6:00 pm Daily to be guaranteed passage off Put-in-Bay. As with the Jet Express reserving your Put-in-Bay Golf Cart in advance is strongly suggested, as carts are frequently sold out. 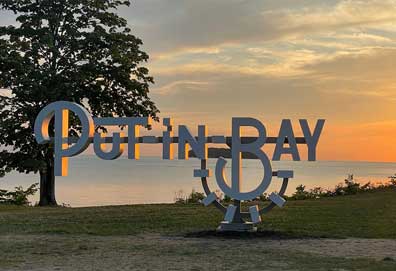 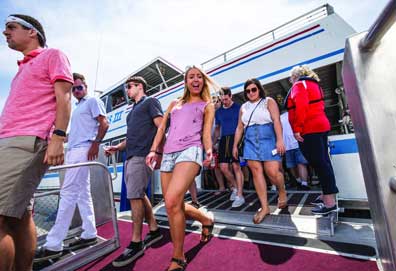 The All-Star Ohio House is Put-in-Bay’s Premier Rental  Home Located In The Heart Of Downtown Put-In-Bay! Learn More About Put-in-Bay At:

For additional information about Put-in-Bay, visit the Put-in-Bay Visitors & Convention Bureau. View a complete informational listing of everything there is to know, see and do at Put-in-Bay! Explore our “Key West Of The North” and see why over 800,000 visitors annually so love this quaint victorian island!

Dine at our Put-in-Bay Restaurants!

Learn About The History Of Put-in-Bay

Have a Question About Put-in-Bay?

Click the button to the right to inquire about rates & availability! One of our representatives will respond promptly!